Earlier this year, the City of Santa Cruz ended a long-standing collaboration with the Bike Church and several other nonprofits and public agencies to distribute unclaimed bicycles to youth in need. For over fifteen years bikes had been made available for nonprofits to give away to youth, and since 2008 the Bike Church had helped facilitate the program by hosting the distributions on its site, as well as coordinating with other groups and offering mechanical assistance to their representatives. Without any public process or notification, however, the SCPD ended their collaboration with us and began giving the bikes instead to a for-profit business called the Bike Dojo, which also runs a youth program. We are pushing for more information about this change, and for the reestablishment of a distribution process which is open to all nonprofits.

Please call or write City Council to demand a transparent public process, as well as the reinstatement of a program open to all nonprofits: 831-420-5020 or citycouncil@cityofsantacruz.com.

In 1996, the City decided instead of auctioning off unclaimed bicycles, to work with nonprofits to get them out to youth in need. At times the program faltered, so in early 2008 the Bike Church offered to take on most of the administration, as well as hosting the actual distribution events. Since that time, we've hosted 16 distributions, getting out 415 bicycles through organizations like Barrios Unidos, Green Ways to School, Natural Bridges High, the Walnut Ave Womens' Center, and many more. The least desirable bikes, most of them incomplete or in severe disrepair, were left at the Bike Church, which as a community repair shop and recycling center is uniquely suited to handling a large volume of "bike junk" and redistributing it for cheap-to-free to the community. Indeed, independent from the City's distribution program, the Bike Church has given away over 500 bikes since early 2008, just under half of them going to youth, the rest to adults through our work-exchange program.

Earlier this year, without even the courtesy of an email or a phone call, the SCPD decided to end this distribution and our years-long collaboration. Emails from the SCPD reveal that in part the change was made "at the request of council members", and that they were, "referred to the Bike Dojo's program by Vice Mayor Hilary Bryant". Bryant's husband, Dave Shuman, owns a pedicab business called Cruzin' Pedicabs, whose website proclaims they are operating "in association with the Bike Dojo". While we have no reason to believe that either Bryant or her husband have anything to gain financially from this association, and while we have no qualms with Cruzin Pedicabs (in fact we love pedicabs!), we are concerned about the fact that this program changed in a rather mysterious way, and appears to benefit a friend and/or business partner of a council member who influenced the change.

Prior to this change, only registered nonprofits were allowed to participate in the program, and distributions were open to all nonprofits and public agencies in the city. The Bike Church is a registered nonprofit as part of the Santa Cruz Hub For Sustainable Living, is mostly run by volunteer labor, and is a veritable community institution that has been serving our community for over a decade. Now the bikes go to a new for-profit business which uses its youth program to promote memberships at its gym, and whose distribution of City bikes is not open to all schools and nonprofits. While the Bike Dojo does collaborate with nonprofits to distribute bicycles, their youth program (Project BIKE) is not listed as either a nonprofit agency or as a sponsored-project of another nonprofit on their website, nor in newspaper articles, and their staff have told us they cannot accept bikes as tax-exempt donations. Most concerning to us is that we've heard from multiple staff people at the Bike Dojo that they are selling some of the City bikes to fund their youth program. City policy strictly forbids the sale of bikes, excepting only those in severe disrepair--and even then only to recoup the costs of refurbishment.

The Bike Church submitted a request under the California Public Records Act but has not received any documents that record a discussion or decision which explain the change. Although as mentioned above the SCPD referenced Hilary Bryant as recommending the Bike Dojo, our public records request did not turn up any communications from Bryant at all. An unnamed Council member originally told the City Records Coordinator that she or he had "several dozen" emails on the subject, and delayed the process to see if we really wanted them all. When we confirmed the request, however, we received only four brief emails. According to the Records Coordinator, the unknown Council member later realized that those dozens of emails were unrelated to City business, and sent from a private account (see email exchange below).

We at the Bike Church would like to see the reinstatement of this valuable program, which helped hundreds of youth and several nonprofits and public agencies, as well as contributing to our supply of used parts by which we are able to keep cycling affordable, and even to offer parts and service to hundreds of people who have no money to pay at all. We also don't appreciate the secretive process, and the suggestions of back-room dealing. We hope you agree, and that you will contact City Council and let them know what you think about it.

Following is an email exchange between the City Records Coordinator and a mechanic at the Bike Church seeking public documents:

Thanks again for following through on this. I am kind of confused though as to why you called me to ask for more info about what I wanted, saying it would be cumbersome--but now I only get 4 brief emails? Are there other communications between the Bike Dojo and the City (including the SCPD)? If so I would like to see all of them.

I apologize if my call was confusing. I initially called you because a Councilmember thought they might have several dozen emails to provide in response to your request. This  turned out not to be the case as those emails were under a personal email account and not relevant to any City business.

I had all Councilmembers check for any correspondence responsive to your request, including in their City issued email accounts. The four emails I forwarded to you yesterday is all I received. All other Councilmembers had no responsive records.

The Santa Cruz Police Department already responded with any responsive records to your request on August 17, 2012.

Please let me know if I can be of further service.

If you visited The Bike Church in December, you might have found our doors closed! But it was for a good cause. With the New Year, the Bike Church Collective decided to create a New Bike Church. Volunteer crews worked together to tear down old structures and build new counters and work benches, using the old workbenches for lumber of course. There is more space now to move about and we hope to make more improvements throughout the year. Suggestions are welcome! Come check it out ! 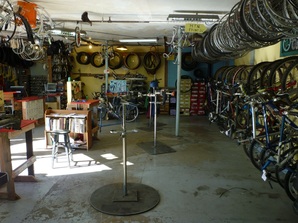 You can see in this photo that we have relocated the FOR SALE bikes to the back wall and and the mechanic's counter is now by the door. There is a long aisle of work stations running the length of the room. Most of the used parts are now located on the far wall in this photo.

New Mission Statement for The Hub

The Hub board of Directors recently went through the process of re-evaluating our mission statement and envisioning our ideal future for this community nonprofit.  It was inspiring to revisit our 16 year old mission.  Here is what we feel we are here for, and why we keep working on this Hub of ours:


The Hub for Sustainable Living is a Santa Cruz resource center for Do-It-Yourself, human-scale technology and an advocate for livable, interconnected communities.  Our projects provide access to space, resources, and educational opportunities through demonstration, outreach , and hands-on learning.  Sustainable Living includes appropriate use of materials (salvage, reclamation, recycling), human-powered transportation (bicycles, skateboards, feet), and skill-building that empowers people to meet their needs in a self-sufficient and affordable manner using second-hand materials and local goods.  We strive to create a diverse, safe, and inclusive environment, and we embrace collective organizing and consensus decision-making.  We seek to shape society around our shared values.

With the new mission statement we have come also to a new name: we are now the Santa Cruz Hub for Sustainable Living!

With this widening of scope we welcome 2 new projects into our organization:  The Computer Kitchen and the Fabrica sewing collective.